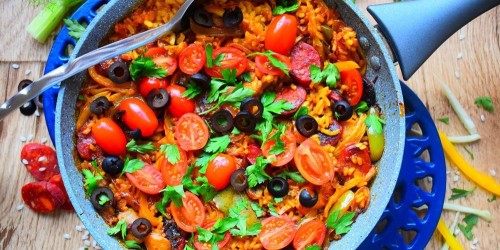 A traditional Paella  with chicken, chorizo and prawns, mixed with a delicious selection of vegetables including fennel, tomato and peppers . Garnished with chopped parsley, lemons and olives

The Virtual HomeCook app will find recipes you love and automatically put them into your own personalised monthly menu plan and shopping list! If you love to socialise it has a fantastic dinner party planner with a shopping list too! Find out more

About our chicken and chorizo paella recipe

Paella is a traditional Spanish dish created in Valencia. paella is named after the pan it is cooked in and paella means frying pan in the traditional Valencian language.The dish traditional  is made of rice  with a mixture of meat including rabbit, chicken, and duck with green beans and butter beans. seasonal ingredients are often added which can include snails, artichoke hearts and stems. The paella is usually seasoned with saffron and sometimes rosemary.  There is also a seafood version where all meats are replaced with seafood and the beans and green vegetables are omitted. Finally there is a mixed version of paella which mixes both meat and fish within the same dish.

Our paella is a mixed paella with modern Spanish ingredients. Our meats are chicken and chorizo, our fish is prawns, our vegetables are peppers, onions, fennel and cherry tomatoes. Our seasoning is bay leaf, cayenne pepper, garlic, turmeric, saffron and smoked paprika. We serve the paella with chopped parsley olives and lemon .